Isn't it odd how,as soon as you come under pressure to think of something NOW, your mind goes blank? 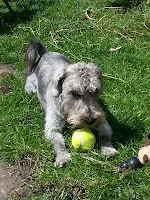 This time last year, almost to the day, we drove to Cheshire on the pretence that we were Having A Day Out At A Stately Home; in reality we were providing the perfect childhood memory (and saddling ourselves with hopefully many years of even more responsibility) and taking the daughter to look at a puppy. We thought we would look, have a measured conversation and if all went well return a week later to collect him.
Fools.
We drove away that day with a small, whimpering bundle of black fluff who has since grown into a leggy bundle of grey fluff. We had no bed, food, bowls, leads, toys. We had nothing. Not even a name. And try as we might to come up with one, every spark of ingenuity or creativity was gone. We could pick up the bed etc on the way home. A name wasn't quite so easily resolved.
In the end I suggested Rufus after the red setter in the Dark is Rising series. I always wanted a red setter. You can hear me yelling it in tones of utter despair as he hurls himself enthusiastically at peaceful picnickers. And at night, when he is asleep his head on my knee, he becomes Rufus Bear. The daughter and I like to sing it to the tune of Rupert Bear, I'm not sure how he feels about it.

I always knew I would have a new name if I ever got published, there's a romance author who already publishes under my real name (to be fair we share the name, along with many, may others) for a start, but I didn't know that choosing a pseudonym was much harder than naming characters. Or the dog for that matter. Luckily I was still on holiday with @nellbelleandme so we decamped, with two of the kids, to a pub where we drank coffee and brainstormed ideas. Tempting as it was to go for a whole new identity I decided to keep it simple and not change my first name.
It took a while but we ended up with a shortlist of ten and I sent them to my editor (! Sorry, but they are still exciting new words for me to type). The list may* have been heavily influenced by my favourite books and TV Shows with just a slight hint of Buffy and Anne of Green Gables.

Ten became two became one. I love coffee, I talk far too fast, I have a dog with heavy eyebrows and a winsome expression, I once lived in a small, quaint Connecticut town... In April 2014, the first Mills and Boon Cherish/Harlequin Romance by Jessica Gilmore will be published.

*Okay, it definitely was. Blythe, Summers, Willows, Gilbert anyone?
Posted by Jessica Gilmore at 03:28

Oooh... I wondered if you'd picked Gilmore after those Gilmores. Is an excellent name though xx

I did, hoping having the name might also give me the excellent if fictitious metabolism...

Jessica Gilmore
York, United Kingdom
Charity-working, dog-walking, child- wrangling, dust-ignoring bookworm who likes to write emotionally satisfying romance in what is laughably known as 'her spare time'. Likes cake, wine, sleep and Scandi Noir; the bigger the jumper, the rainier the scenery the sharper the cheekbones, the better she likes it.